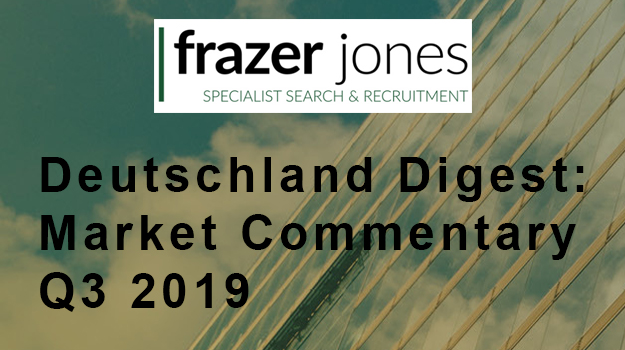 There is so much to write about in this edition that I’m not sure where to start. It’s been a really busy quarter for everyone with the expectation that as we go into quarter 4 things aren’t likely to slow down. Brexit is of course, as ever, the central theme of what is impacting the industry, though with each passing day there is less clarity on what the end result will be. Other factors impacting the market is the looming threat of a (hopefully mild) economic slowdown, the continuing trade war(s) in the USA and the threat of geopolitical conflict with Iran all contribute to lowered investor sentiment, keeping stock markets volatile. To sum it up briefly, it’s been eventful.​

For the first time, I have a co-editor assisting me with this edition. Some of you have already met Marie David-Cavaz, but for those of you who have yet to make her acquaintance, she has joined me in focusing solely upon the Financial and Professional Services (FSPS) sector and from here on we will both compile this, with Marie slowly taking on a more detailed focus on the PS market, whilst I focus on FS.

Conversations I have had recently indicated that people have been somewhat non-plussed as to what is going on politically in the UK, so I thought I would help to present this with some more clarity (in an entirely impartial manner). Then, for the HR focus, at the request of one of our clients, we will start producing an annual Salary Survey focused solely upon FSPS for HR, to be published in every Q3 edition moving forward. On this occasion it is limited to the four major functions we have hired for over the past two years (HRBP, L&D, TA, Reward) but it will be expanded to all areas from 2020.

I will limit this entirely to a summation of the information available in the public domain. Nothing contained herein will constitute my own opinion, in order to provide an entirely unbiased overview of the Brexit process as it sits in our country. This is correct and relevant up until the point of publishing.

I am sure that most are aware that in the summer, there was a handover of power, with Boris Johnson coming into power as the new Prime Minister after Theresa May called time on her leadership (under extreme pressure from her own party). This signified a move towards the right within the party, as indicated by the formation of the new Cabinet (the leaders of the various branches of Government) with many comprising some of the most openly right wing members of the Conservative (Tory) party.

Boris Johnson is a loyal ‘Brexiteer’ and his central commitment is that the UK will leave the EU on the 31st October no matter what, with or without a deal. This has resulted in stiff opposition from all major parties, including many within the Tory party itself. One of the first major announcements from the Government was the ‘Prorogation’ of Parliament, which means to end a Parliamentary session in accordance with setting out a new roadmap of goals for the Government. This was a massively contentious decision, a topic that dominated the Tory leadership debates with all key parties other than Boris Johnson 100% ruling out doing such a thing. Many believe this is an attempt to frustrate the British Parliament from having their say on how the Brexit process is handled. The prorogation means that there will be a 5 weeks break before a new ‘Queens Speech’ setting out the new goals of Johnson’s government and allowing Parliament to sit once more. However, those within the Government claim this is an entirely normal process when a new Prime Minister starts, in order to set out the new focus of said leader, whilst in addition the current Parliamentary Session is the longest in recent history and starting a new one would reinvigorate many of the topics that have fallen to the wayside.

This prorogation in turn led to a major confrontation in those few days that Parliament were able to sit prior to them going back into leave. A motion was tabled by Hillary Bennthat would require, by law, that the Prime Minister request an extension to Article 51 in the event that no deal is negotiated by 18th October. All major opposition parties voted in favour of this, as well as 21 members of the Tory party, thereby passing the motion, which in turn eventually received Royal Assent and became the Benn Law before the prorogation took effect. The 21 members of the Tory Party who voted against the Government were expelled, with some now moving to the opposing Liberal Democrat party, with the others sitting as independents. The four days in which Parliament sat saw five votes, including two for a new General Election on Oct 14th, all five of which the Government lost with the majority opting to focus only upon ensuring that the UK does not leave without a deal.

The current state of play is that by Law, Boris Johnson is required to request an extension should a deal not be reached. Though in all media appearances, he maintains his claim that the UK will leave on October 31st, stating that he would rather be ‘dead in a ditch’ than miss this deadline. How he plans to do this remains the subject of much debate.

Subsequently, the British Supreme Court have since ruled the prorogation to be ‘null, void and of no effect’, though stopped short of ascribing blame to the Prime Minister on lying or misleading the Queen. This brought about the immediate reconvening of Parliament. The first days of meetings have largely focused on what this legal ruling could mean and how best Parliament can enforce the law requiring Boris Johnson to ask the EU for an extension of Article 50 should a deal not be agreed by the middle of October, though there is still doubt as to whether a majority can be achieved for any additional enforcement, given the different needs and perspectives within all major parties.

This is still only a very brief overview, with much else going on, but should provide at least some cogency on what has happened to this point. I would be more than happy to discuss the topic in greater detail with anyone who should wish to go over it.

Market Overview: Everything Else

There are many warning signs for upcoming harder times for the German economy. Many major projections include the likelihood of some slight slowdown within Germany this year economically, with growth over the following two years also expected to be constrained. The Ifo, a Munich-based think-tank has again cut projections for growth this year down to 0.5% (from 0.6%) and next year down to 1.2% (from 1.7%). In addition to this, unemployment is expected to rise slightly due to the continued impact upon the production sectors due to market uncertainty (Ifo Institute, 2019).

Measures are being taken to counter this (not only for Germany) by the ECB, with two major stimulus packages announced by the ECB in an attempt to boost lending, though the most recent of these has been criticised by Bundesbank President Jens Weidmann as being too heavy handed. This is one of the final acts of Mario Draghi as leader of the ECB, with a new leader shortly to be announced (likely to be Christine Lagarde), in addition to new leaders for both the IMF (Kristalina Georgieva) and EU Commission (Ursula von der Leyen). This marks the first time in history where all three institutions have been led by women and is being hailed as a major step forward for the industry.

However, it is not all storm clouds; Germany remains a highly attractive prospect for inward investment, with a number of large scale M&A deals being concluded in the past three months. Perhaps the most notable of these is the acquisition of Fintech business PaySafe by PE firm KKR. This is the third major acquisition by KKR in Germany and marks a significant increase in their holdings within the country. Other notable transactions include the merging of FirstSafe and Axcit Capital Partners and the first entry of a number of our clients who we are assisting with their hiring. AT Kearney ranked Germany 2nd globally in their Foreign Direct Investment Index for 2019 recently. In addition, the Big 4 (PwC, Deloitte, KPMG and EY) are all reporting a 10% increase in work carried out over the past 12 months in Germany.

Much stands to be (at least partially) resolved in this final quarter, barring possible changes, though the expectation is that for the foreseeable future the industry sector will continue in its volatile trend and difficulties (and opportunities) will remain a key factor for most firms.

Many specialist functions within the financial and professional services space have seen significant growth over the past couple of years, given the levels of low unemployment coupled with the impact of macro factors across the EU culminating in growth of the sector within Germany.

Given the pace of wage growth this year in the sector, we have compiled a guideline for high, median and low salaries for four of the main HR functions that we have been sourcing for within the FSPS sector. All statistics contained herein are only intended as a guide and have been taken from the data compiled by Frazer Jones during the course of 2018/2019. These figures are based on total compensation, excluding the value of any additional benefits such as pension or a car. Please note that this does not include board level hires, as we do not have enough data to give an adequate summation to this level.

We have experienced another jump in hiring volumes across both FS and PS, with a spread across a number of different functions and levels. Roles hired for the past quarter include:

If you would like to have a confidential conversation around looking for a new role, or are hiring in your team and would consider utilising Frazer Jones as a partner, then please get in touch.

All eyes are focused upon the possibility of seeing some closure on the saga of Britain’s exit from Europe. Though not assured, many forecasts do project that they will be leaving on the 31st October, irrespective of whether a deal has been reached or not. Whilst there is the possible threat of a downturn in Germany next year, in conjunction with a projected slight decrease in hiring for the rest of this and the start of next year, we still expect hiring across the sector to remain high. Candidates for specialist or strategic positions are expected to continue to receive offers of significant salary increases to entice them into moving.