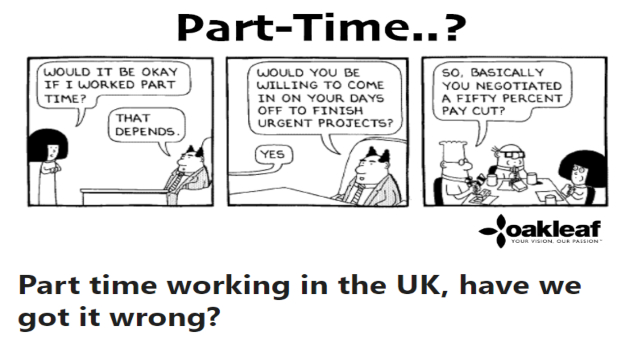 I was perusing my LinkedIn newsfeed yesterday and found five separate comments, statements, and clickbait style soundbites around flexi and part time working. Some were from fellow recruiters churning out the usual rallying cry around how organisations need to wake up to the realities of the modern workforce (yep heard that before). Others were from contacts who were talking positively around their current working arrangements and publicly thanking their employer. The last were from clients actively recruiting for part time roles in the HR space and clearly reaching out to their networks for ideas and solutions. I would say on average I probably see five similar comments every day on LinkedIn, which clearly shows its still a hot and contentious issue.  However, I am yet to see anyone really comment on this area in a manner that matches my own opinion on the two concepts; which is that ultimately many UK businesses are using these concepts as a positive PR stunt whilst fundamentally ripping of their employees!

I appreciate this sounds a little harsh, but it’s hard to ignore the realities of how most firms approach flexible or part time working.   Firstly, let me clarify a few points. A truly part time role is where a firm has recognised that the objectives of a role can be achieved in less hours/ days than a full-time position. This is not a cost saving measure by a company more an understanding after evaluating a role that it is not a full-time requirement. A part time role is not a full-time position where an applicant has asked to perform the same role over a four- or three-day week to accommodate personal circumstances.   In the case of a full-time role, the only way of really creating a part time opportunity is to facilitate a job share scenario, thus employing two part time workers to fill a full-time position.

Unfortunately most firms when asked about their part time workforce will concede that very few of their part time workers aren’t working in positions that were historically full time roles, and that in reality they are simply working on a part time basis delivering the requirements of a full time position. More often than not these idiosyncratic arrangements arise to accommodate individuals returning from maternity or individuals keen to pursue external ventures or working parents who require flexibility to meet the demands of family life.

The firm discusses various options and concedes that the role can be delivered four days per week instead of five, and they agree the working hours and terms around this. Often there is no job evaluation that takes place, just the gut feel of a hiring manager of trusting their employee will be able to deliver to the standards required. Often targets and objectives remain the same and expectation to perform is just as it was before, except there is a mutual agreement that you “have Fridays off, and we won’t call you unless it’s an emergency!” The firm and employee both leave feeling elated; the employee feels like they have been granted the chance to marry work and family commitments, the employer can add another tick in the box about how supportive they are with working families and can cite great statistics around the number of “part time” workers they employ.

I may be wrong, but this isn’t part time working. Whilst the expectations of the role and its deliverables haven’t changed or been pro-rated – your salary and bonus have! You are now being paid 20% less to deliver just the same as before, with the added pressure of trying to do it in four days rather than five.  More often than not you are now seen as part of the “part time” workforce and how often do people in this situation feel passed over for promotion and career advancement because they aren’t viewed as having the same level of impact as their full time colleagues?     How often do those working four days per week really avoid doing any work on the fifth day? How often when you are working four days per week do Thursdays turn into a 12/13 hour day to get everything done? How often when you work four days a week are you logging back on every night when you get home from work at 8pm to keep on top of things. How often do you feel like you are working as many hours as a full time employee but getting paid 20% less? For me the insult to injury is the pro-rating of your bonus, where you have delivered successfully on all your full-time objectives but you only receive 80% of your bonus because you work “Part time”.

I hear about this situation all the time and often really push candidates on how their part time and flexible working arrangements really work for them. The concerning thing is that more often than not the individuals I talk to about this, feel that its part of the course and actually the flexibility and job assurance is more important than pay equality at the end of the day. People feel like they have to begrudgingly accept the 10pm finish on Thursday or watching Eastenders with your laptop whilst tapping out e-mails every single night. It’s almost as if it’s part of British working culture, that we just have to get on with it! For me I feel it’s a form of exploitation by companies who reap all the benefits of retaining their talent, whilst also reducing their salary costs. It’s this lackadaisical approach to offering employees more flexibility that has infected British working culture and it’s something very few companies have started to address intelligently.

The concept that several of the FTSE 100 and other firms have started to adopt is that of “Smart Working”. Smart Working is used by firms who identify what roles in their company truly require full time employees and those that can be done on a part time basis. If the role is evaluated as a full-time position it is allocated a number of hours per week (usually 37.5 hours) and as long as the employer delivers these hours in whatever mix works for them they are treated as a full time employee. Obviously there are nuances of how the hours are monitored and agreements with line managers on specific schedules but I know of two FTSE 100 well known firms who operate this contractually and it allows individuals to work 4 days or 4.25 days per week without having a 20% reduction in pay and bonus. It allows individuals to work and deliver in the way that works best for them, without having to compromise financially or feel that flexibility will have a negative impact on your career advancement.  It would be good to see whether these initiatives have had a positive impact on employee engagement and staff retention at both firms or how this has affected staff productivity and output, but I would hedge it hasn’t had a negative effect?

I appreciate that some firms really think things through around flexible and part time working, but in the main most are allowing their employees to sign up for an arrangement which is unfair and unfeasible, and ultimately puts them under increased pressure. Frustratingly most people I talk to tend to understand that this is the situation they are in, but they would rather lump it as in reality there is no alternative in their organisation.   In an era where there is constant chatter and talk around employers changing and modernising their approach to flexible and part time working, surely, it’s about time people started pushing back harder on the arrangements they are being offered? If your pay is being pro-rated surely your targets and objectives need to be pro-rated?  If you can deliver on the set number of working hours of a full-time employee in four days (most contracts will be around 37.5) why can’t you be paid as a full-time employee?  Surely it is about time to challenge these outdated HR concepts when a company is trying to shoehorn your full-time role into a part time working arrangement?

I feel that whilst many firms laud themselves as having embraced part time and flexible working, the reality is they haven’t. They are offering stagnant solutions that are uncreative and are ultimately financially beneficial for the firm. Some businesses have really thought this through but in reality, most haven’t and yet many put up with it, like they are on the back foot somehow. How has it got to this? Is smart working the solution for modern businesses? How long are people going to be asked to make financial sacrifices to achieve a modicum of work life, when they are often delivering just as much as full time employees?